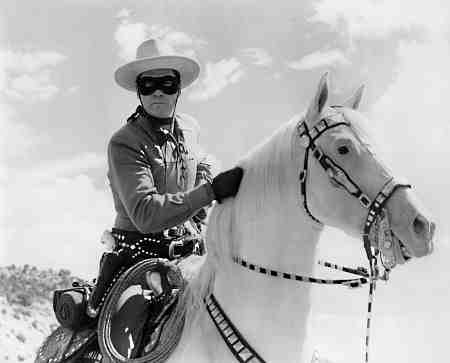 I loved watching TV when I was growing up.  Yes, I’m old enough that some of it was actually still in Black & White (for our Gen X readers, that means all the pictures on TV didn’t come in color).  I watched Andy Griffith, Lassie, and Mr. Ed, the talking horse!  I didn’t really like the early Superman, but I think that maybe it’s because I thought he was a fake… I mean, the guy can stop bullets, but he ducks when they throw a gun at him?  Somethings not right there.   But my favorite show of all these “oldies but goodies” had to be The Adventures of the  Lone Ranger!  I suspect that it’s what gave me a slight “cowboy” edge today… remembering those days of my childhood, imagining that I WAS the Lone Ranger.  I spent my gradeschool years fighting the bad guys with my faithful sidekick Tonto; wearing my mask and twirling my guns with silver bullets; whistling for my valiant steed Silver to come and untie me with his teeth when I had been surprised, captured and tied up by the one eyed villan.  Man, those days roaming the wild west as the “Lone Ranger” were the glory days of my childhood.

So what do my childhood TV habits have to do with SYNERGY???  Synergism, in general, may be defined as two or more agents working together to produce a result not obtainable by any of the agents independently. The word synergy or synergism comes from two Greek words: erg meaning “to work”, and syn meaning “together”; hence, synergism is a “working together.”

A synergy is where different entities cooperate advantageously for a final outcome. If used in a business application it means that teamwork will produce an overall better result than if each person was working toward the same goal individually.

Most people in the business world have read or know about Stephen Covey’s “7 Habits of Highly Effective People”.  It states that “the sixth of the habits is- Synergize. This habit involves you putting your head together with the other party or parties in order to creatively brainstorm a synergistic solution to a problem, i.e. to find a solution which contains ‘win-win’ benefits. It can only be done successfully if you have first practiced habits 4 & 5. The well-known definition of synergy is as follows:

Synergy- When the whole great than the sum of it’s parts!”

If synergy has that kind of dynamic impact on business, on group dynamics, on life… Then why do so many people INSIST on going it alone?  Why do tons of people avoid, ignore or evade attempts at SYNERGIZING with others for greater impact?  I dunno?  Maybe they didn’t have a TV when they were growing up?  Maybe some people need to remember this one important truth from my hero atop his galloping white steed… DUDE! EVEN THE LONE RANGER HAD TONTO!!!

Here’s the honest truth… and I hate to be the one to have to break this down for you this way, but here goes.  The hard truth is… YOU’RE JUST NOT GOOD ENOUGH.  I know, I know, don’t yell at me!  I hear you saying, “You don’t know that!  You don’t know me!  Who are you to judge me?”  Well, if you’ll calm down, and stop spitting on your computer monitor while you vent, I’ll try to explain.

I’m going to take a few days to talk with you about why intelligent, gifted people just like YOU are gutless when it comes to risking the journey of Synergizing…  then we’ll talk about why “GOOD ENOUGH” really isn’t “GOOD ENOUGH”.

Are you really satisfied that where you are, how you are performing, and what you’re getting out of every aspect of your life is the VERY, VERY BEST that it could ever be?  I didn’t think so… so come back tomorrow and let’s talk about it a little…