How Safe is your “Criticism Zone”? 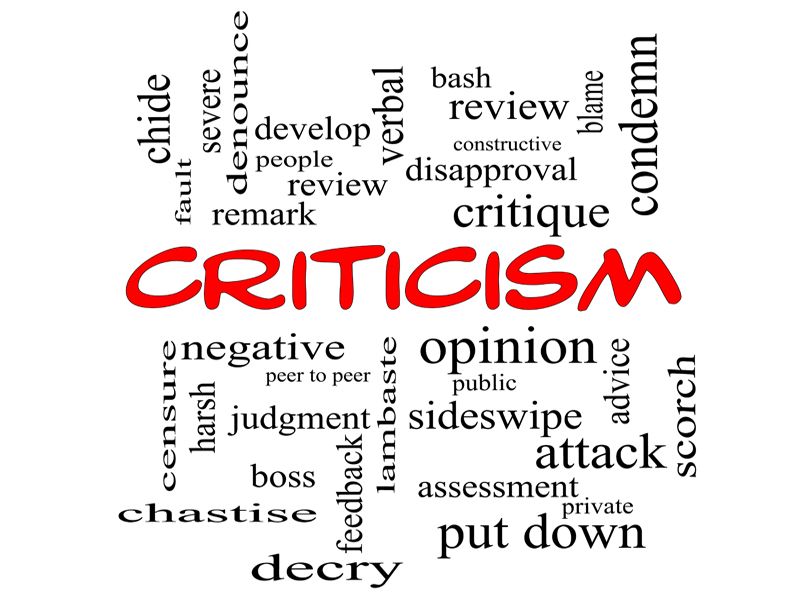 Most of us heard the Aesop fable of “The Man, The Boy & The Donkey” when we were growing up… but for those who haven’t, or don’t remember, let me fill you in…

A Man and his son were once going with their Donkey to market. As they were walking along by its side a countryman passed them and said: “You fools, what is a Donkey for but to ride upon?”

So the Man put the Boy on the Donkey and they went on their way. But soon they passed a group of men, one of whom said: “See that lazy youngster, he lets his father walk while he rides.”

So the Man ordered his Boy to get off, and got on himself. But they hadn’t gone far when they passed two women, one of whom said to the other: “Shame on that lazy lout to let his poor little son trudge along.”

Well, the Man didn’t know what to do, but at last he took his Boy up before him on the Donkey. By this time they had come to the town, and the passers-by began to jeer and point at them. The Man stopped and asked what they were scoffing at. The men said: “Aren’t you ashamed of yourself for overloading that poor donkey of yours and your hulking son?”

The Man and Boy got off and tried to think what to do. They thought and they thought, till at last they cut down a pole, tied the donkey’s feet to it, and raised the pole and the donkey to their shoulders. They went along amid the laughter of all who met them till they came to Market Bridge, when the Donkey, getting one of his feet loose, kicked out and caused the Boy to drop his end of the pole. In the struggle the Donkey fell over the bridge, and his fore-feet being tied together he was drowned.

“That will teach you,” said an old man who had followed them:

“Please all, and you will please none.”

Leaders have an incredible opportunity each and every day to speak into the lives, performance and hearts of their team members. Leaders offer direction, encouragement and yes, even criticism. But a thought haunts me as I look across my own decades of leadership development. “What if those people had actually listened to me, and acted on 100% of the ‘constructive criticism’ I offered them?” The thought is a little frightening to say the least, and terrifying the longer I ponder it.

The longer I live and lead, the more leery I am of giving constructive criticism, or even advice. I have found it much more beneficial instead to use the “Issues/Options/Consequences” strategy when given the chance to impact the growth and development of those I lead.

Typically the “constructive criticism” opportunities arise in one of two areas: A.) Evaluation Time, or B.) A time of Crisis. These situations are consistent no matter the industry, job title or culture. What I’m suggesting is that in either the Evaluation or Crisis that your team member AND the organization might be better served by using the “Issues/Options/Consequences” approach instead. Here’s how it works.

First, establish exactly what the most critical and important ISSUES in the situation are at the moment. Deal with those first, and limit yourself to a maximum of three issues. Trying to deal with any more than three at any one time will likely end in inability to focus, mediocre response, and failure.

Next, brainstorm a list of all of the possible OPTIONS to address the challenges faced within each of the three ISSUES. For instance, maybe one of the issues is failure to complete tasks on time. A variety of options might include breaking tasks into smaller pieces, realignment of tasks based on skillsets, developing and using a timeline to better plan the use of time and resources, and so on. But other options might also include ignoring the problem, blaming others, getting angry when being held accountable for failures, and so many other negative options.

Once the OPTIONS have been listed, then develop a quick list underneath each of possible CONSEQUENCES if you choose that particular option. An example might be, if you choose to lose your cool or blame others for your failures, you could be demoted, moved, get a pay cut or be fired. Another example… if you break the Issue into smaller pieces that are easier to achieve, that you’re more like to complete the task or successfully address the Issue. This would likely bring praise from your supervisor, help the organization succeed and even result in promotions or pay raises. It absolutely would have a sense of self-satisfaction and pride as end results.

I’ve found in my life that most people do not want to fail. They don’t set out to lose or disappoint. However, from time to time they will need support, direction and intentional encouragement. When our “constructive criticism” is more than condescending critiques from our ivory towers of leadership, and more helping them to build a bridge to success, then and only then will we see the powerful and positive development of our team in ways we might never have dreamed would happen!