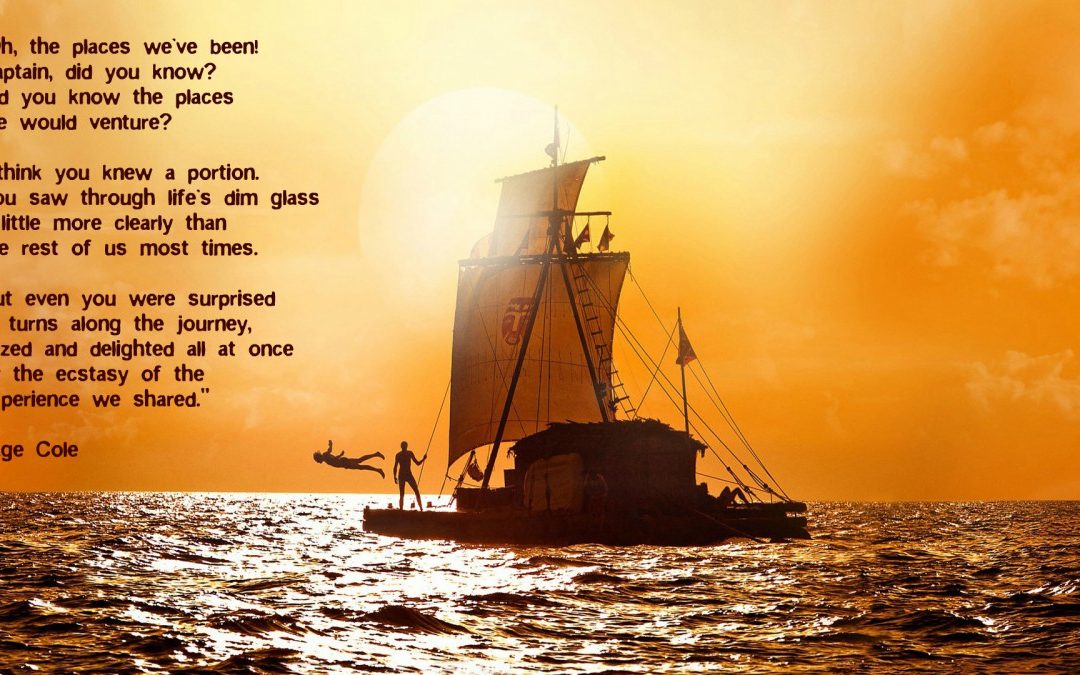 What a fine ship she was… from stem to stern, she was the envy of the fleet, the finest ship whose bow ever split the sea. Before her, many had sailed; early visions, yet mere whispers of what she was to become.  Multitudes would try to duplicate her style, her grace, her form.  And though some attempts were more valiant or fruitful than others, none would ever make her equal.

But what is a ship? A tool, a grand means to a passionate end.  Visions glorious and dreams courageous are among her cargo, but she does not own them.  No, these belong to her Captain. He is the one who once did cast a steely glance to where sky meets sea, and believed there was more; more just beyond that shimmering edge where most men fear to cast their eyes. And so sails unfurled and billowing, her bow into the wind, this ship and her Captain set out toward this new horizon, this distant union of heaven & earth.

We have been his crew, you and I. Uncharted waters were no place for the timid. Nor was serving on a ship whose Captain’s food was his dreams.  For sailing virgin waters meant opening ourselves to new adventure, obstacles, and even risks. Still we embraced the danger, because his dreams were contagious, infecting each member of the crew, until our own dreams grew like a fever.  Our only relief came as we allowed the dreams to chart our course towards the horizon.

Oh, the places we’ve been! Captain, did you know? Did you know the places we would venture? I think you knew a portion. You saw through life’s dim glass a little more clearly than the rest of us most times.  But even you were surprised at turns along the journey, dazed and delighted all at once by the ecstasy of the experience we shared.  And we laughed together.

I, one among many, am so proud to have been among his crew.  How many lives have been altered by his passion?  So many of our worlds have been changed because he led us courageously.  When the waves have passed, and all ships one day sit in port or lay in a watery grave, you and I will still remain.  The truth, the experience, the window of life we have shared will still remain.

So many things we’ve learned from our Captain, eternal things, life-changing truths.  He taught us that no matter when or where you wake up in the morning, the horizon is still out there… It still challenges us to reach beyond our societal and self-imposed limits. Our Captain taught us the golden rule of the sea…

to set our ship towards the goal, and to fix our eyes on the heavens for direction.

But most of all, he taught us that although the ship is grand and glorious, it is the journey and what we do along the way that are truly magnificent!