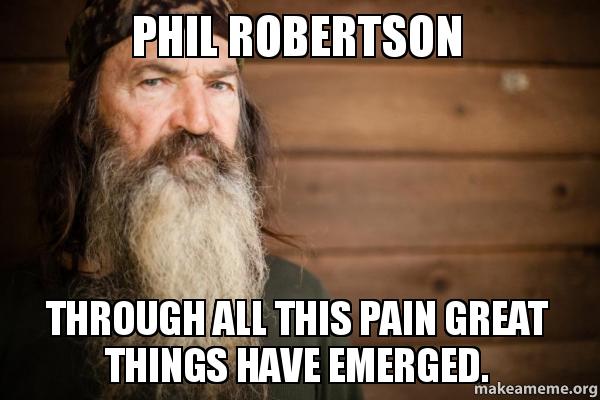 Phil Robertson… Duck Commander Founder…  a man of character.  But now it’s Chick-fil-A, Round 2!  Why is it that this society doesn’t get it?  If you ask a Christian, whose faith and belief system is based on the teachings in the Bible, what he thinks about homosexuality, why is it surprised that he calls it a sin?   I mean, seriously, the guy prays at the end of every episode of their hit show.  They espouse Christian values on the show, and in interview after interview before this one they’ve made it clear- they are Christians first, family members second, and TV star is way down on their list.  Politically correct?  It’s not even on the list!

U.S. Census figures from 2010 show the population in the US that claim to be homosexual is somewhere around 1%.  In much of the LGBT literature, they espouse an incorrect number of 10% population as being homosexual.  But that’s at best a misrepresentation, and at worst a lie.  If the A&E people are taking a stand based on their convictions, then that’s their choice.  But if they are doing it because they are worried about money, then they need to think about the population that has made this one of the top shows on television, because they just pissed a lot of those people off.

I caught some wisdom and perspective from my friend Cambri on this whole situation… I’ll  share it here:
Few thoughts on the whole Phil thing…
1. Why was GQ interviewing Phil? He is not exactly the GQ type.
2. Why did they ask him his stance on gay marriage?
3. Why is anyone surprised at his answer?
4. His words were a little more graphic than most would use but if you have ever watched the show, he never holds back. So once again why are people surprised?
5. I think A&E firing him is going to do the exact opposite of what GLAAD wants to happen. Just like with Chick-Fil-A, more people will come out to support the Robertson’s than ever before.
6. I hope that the Robertson’s do not cave, like every other celebrity in this country, and apologize for their beliefs when there is backlash.
7. I hope that when Christians read the statements from the GLAAD spokesman, that they were concerned as to why he thinks that “true Christians” do not believe that homosexuality is a sin. I think this proves that most Christians are more worried about offending someone and being PC than standing up for what the bible actually says.
8. WHY THE HECK WAS GQ INTERVIEWING PHIL ROBERTSON!!

How come Christians and Christianity can be bashed all over television and the movies, mocked and ridiculed as a belief system, and it’s followers taunted as old fashioned and weak?  There are no “firings”, “suspensions” or “hiatuses” ordered because of these attacks on Christianity?  Beyond that, this is a “Reality TV” show, for cryin’ out loud!   What has happened here is definitely a hate crime.  But it’s a hate crime against Christianity, inflamed and blown out of proportion by a liberal network that has lost touch with it’s viewers.

There will be a price to be paid, but it won’t be by Phil Robertson, trust me. A& E… back off and fix this, or find yourself watched about as much as MSNBC.