by PageCole | Jan 12, 2023 | Helping Others, Leadership Culture, Self Development | 4 comments 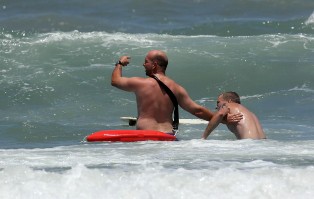 I’ve never been caught in a riptide, but I’ve read stories from those who have.  It’s terrifying.  Swim as hard as you can for the shore, only to see yourself getting farther away with each stroke.   Sometimes as leaders we face similar struggles, wrestling against the tides of public opinion, conflict & other challenges in our lives…  Stories abound about those who were caught in a powerful riptide eventually drowned as a result.  More stories still are written about those in leadership who’ve been overwhelmed by “riptides of life”.  If only swimmers AND leaders had known a few simple, important facts about riptides, maybe their lives would not have been overwhelmed by the tide and ended so tragically.

The circumstances of our lives can be a lot like the ocean… Beautiful calm days, the sun in our face and we’re enjoying the peace sound of the crashing waves.  But there are other days when we feel like we are caught up in the riptides- the riptide of doubt, of fear, of hopelessness. It seems that no matter how hard we swim, we just can’t seem to break free.  The beauty of the beach and the soothing sounds of the ocean are replaced with panic and with desperation.  How do you cope?  How do you survive the riptides of your life?

Riptides are incredibly powerful, so deny the reflex to fight the flow.  Even the strongest swimmers are no match for the strength of a powerful riptide.  The best efforts of an Olympic swimmer are no match for the overwhelming power of the ocean, so the average beach bum doesn’t stand a chance.  It’s just too powerful.  Fighting the flow is exhausting, and when the swimmer finally lifts their head, it seems like they’ve not only failed to reach the beach, but they’ve even lost ground.

Life throws us dangerously similar, almost overwhelming tide of circumstances from time to time.  Our reaction is to fight, to struggle, to grasp for help as we gasp for air.  When we finally do lift our heads, it may seem our situation is worse and hope is farther away than before.  Overwhelmed by the tide of chaos & consequence?  Don’t panic.  Resist the urge to overreact and fight against it.  Take a moment, take a breath, pray… do whatever it takes to face and accept the circumstances without desperation or fear.  Fighting the flow seldom works, whether it’s water or worry.

Riptides are narrow, so swim across the current.  Panic is the most common reaction of someone caught in the overwhelming power of a riptide, and the fear that this current will carry them so far from shore they will never be able to make it back.  So they swim, hard, with every ounce of energy against the flow that bears the strength of the partnership between ocean, moon and geography that have partnered to create the riptide.  But they swim in vain if they swim straight against it.  But most riptides are very narrow, so if the swimmer will swim parallel to the shore, eventually they will come out of the riptide, and be able to make it safely back to solid ground.

Likewise, for many strong leaders, when we are confronted with a challenge, a problem or a culture that pushes us around, faster, farther from our goal, there is an innate, gritty reflex to swim against the tide… any tide.  Call it a rogue spirit, the love of a challenge or a desire to be different.  Defend it as passion, explain it as personal expression but you too may soon become exhausted.  Maybe every battle ISN’T worth fighting.  Some problems are meant to be faced, that is true.  But keeping the option to “swim around it” as a viable choice may have a huge bearing on your success or even your survival in leadership.

Riptides are draining to the swimmer, so call for help.  It’s embarrassing to yell for the lifeguard.  It means we’re in over our head, that somehow we’re not good enough to swim in these waters.  What will the kids building sand castles think?  What will the hot chicks sunbathing whisper to each other?  Call for help… the last thing you want them saying over your body on the beach is, “Is he dead?”.  Swimmers who survive riptides many times are those who didn’t wait to late to ask for help.

Your business, company, family & life all go through seasons.   Sometimes these ups and downs, good times and bad are influences by your choices and actions.  Other times it’s just life.  Be sensitive to when you may be coming to the end of your strength.  Burnout & fatigue are real enemies to effective leadership. Ask your boss for help.  Ask your coworker for some support.  Ask your wife to pray with you.  But whatever you do, ask for help.

What are some of the “riptides” you’ve faced in the past few years, and how would you encourage others facing those same “riptides” to survive and thrive past them?

Life can be a beach… or life can be a, well, you know… don’t let the riptides of your life ruin your days in the sun.