The Cosmos And The Big Red Bronco 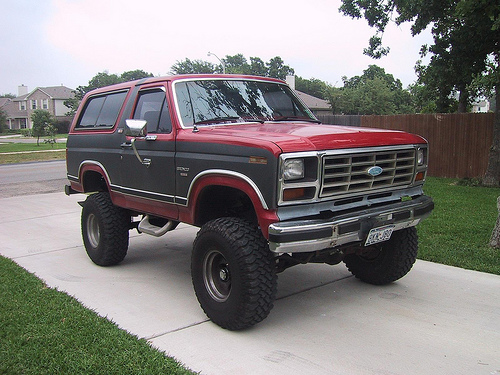 I rounded the corner on Line Street, headed home, and thought to myself, “This was a really weird day.”  Oh, it was full of the same things that every other day in my life seems full of– lots of really normal stuff– dropping the kids at school, going to work, phone calls and a mountain of paperwork.  And it had been a morning a lot like the morning before, and that one like the one before it… but what a day…

Ronda was up early, as usual, hustling to get herself and the rest of the family ready for a day full of activity.  This meant washing and drying two loads of laundry; packing lunches for Erin and Nathan, the two older kids(they didn’t like what they were having at school in the cafeteria- but then who does like tuna loaf?); cleaning the kitchen dishes up from the night before; for Benjamin, the feisty three-year-old, she would lay out his clothes for the day(this was relegated because of my bad fashion sense more than any other reason); walking a mile on the treadmill while having her personal devotional time; and getting herself ready for school.  These minor miracles were usually all accomplished before 7:30 AM, which means they were done a long time before I rolled out of bed.  Little did I know what waited for me in my driveway that day.

I hugged and kissed the three elementary bound family members goodbye as they left for school.  I quickly checked on Benjamin, his Pop-Tart and the early morning cartoons before finally stepping into a steaming shower for just a few humid moments of heaven.  Then it was a quick shave, dress Benjamin then myself(I found it’s easier to wash pop-tart goo off of my skin than my clothes), and out the door to drop him at preschool and get me to work.  And there it sat in my driveway.  My ego… my pride and joy… my big red Bronco.  This would be my chariot to carry me on my travels during the day, and what a way to go!

So up we climbed, shut the doors, buckled our seat belts, and turned the key to start 350 horses of pure power!  But nothing happened.  Not the normal roar of the engine, not a tired groan, not even that weak little clicking noise that happens sometimes.  Nothing.  Nothing is right– there’s nothing like car problems to get your day started off on the wrong foot.  Or track.  Or wheel.  Whatever.

Anyway, I called Ronda at the school, and it paid off, because her class hadn’t started yet.  It wasn’t like she hadn’t done enough already, now she was bailing me out of car troubles, too.

She drove the two blocks from the school to our house in no time, and quickly shifted herself into the passengers’s seat as Benjamin transferred himself from one vehicle to the other.  As I drove to work, thoughts of how my day would be interrupted with buying a car battery, installing it, and then making the big car exchange preoccupied my mind.  I might as well do something about the squeaky fan belt while I was at it, I thought to myself.

An average day at work, and before I knew it my day was gone.  Ronda was now in Tulsa, gone to see the foot specialist for the final time following her two bunionectomy’s… this left me to pick up Nathan at the school by 5:30, swing by the day care for Benjamin on the way to Nathan’s soccer practice at 6:00.

Now, the next move would take some finesse; the tricky part was that Erin needed a ride from Girl Scouts at the Presbyterian church by 6:00 as well.  So I had timed it perfectly, where I would drop Nathan off only five minutes early(his coach was always there by ten till six), then quickly pop back across town to taxi my Girl Scout from her meeting back to her brother’s soccer practice.

But what I hadn’t counted on was the scream.  That’s right, the scream.  I didn’t know exactly where it was coming from, but I had thought it was just the fan belt making noise.  But it got louder and louder each time I drove that day, until finally it was a full, loud and constant screaming from under my hood.

So I did what any responsible, red blooded American man would do in this situation.  I stopped off at the parts store on the way to the practice.  But my Bronco had greater plans than just to stop– it was his wish to die there, so die he did.  What had been presumed to be a worn out fan belt was instead an alternator whose usefulness had come to and end.  In other words, it was broken. Undaunted in my role as a chauffeur, I quickly bought an alternator(and a free set of instructions on how to install it), finagled a quick jump start out of one of my friends, and headed on my way.

Stop number one was a success!  Nathan was delivered as promised to the field of champions, his little league soccer practice!  Now it was up to the ailing Bronco, me, and an excitable preschooler to pick up a lonely girl scout, since by this time we were 15 minutes late.  “Surely this weak old alternator could hold out for just a few more minutes, couldn’t it” I asked myself.

Wrong.  It died ten blocks short of our destination, but only a couple blocks away from our church, where I could borrow a van to finish my important task.  This I did, and quickly sped towards the Presbyterian church where I was certain a very patient little girl in a green vest would assure her daddy that it was OK that he was late.  Only she wasn’t there.  Thankfully, her mother had returned from the doctor’s office early enough to rescue her from being abandoned.

The task that now lay ahead was one I did not look forward to.  I’d never changed an alternator before; I wasn’t dressed for doing something greasy or mechanical; and to be real honest, I wasn’t too excited about having to spend $120 for an alternator.  The man at the parts store assured me I would get $40 of that back if I just returned the old used up alternator.  I wasn’t even sure I could get the thing unhooked and removed, let alone the new one installed and the old delivered back to the store.  But I dove into the task anyway!

Seven good Samaritans, 75 minutes, and two errands for tools later, the job was finished.  And it actually worked!

I drove home with an incredible feeling of satisfaction and positive self-worth that evening.  Me, the guy who takes stuff apart and then can’t put it back together; me, the guy whose automobile expertise only includes changing the oil and filling the gas tank; me, the guy who wouldn’t know a fuel pump from a water pump, or an alternator from a generator; I had fixed my ailing Bronco!

As I basked in the glow of my own admiration and adulation, it struck me that I really wasn’t as great a mechanic as I might have thought.

Sure, I changed a broken part; but the guy at the parts store actually told me what was wrong… and I had three other guys who knew what they were doing talk me through it…  And when it came right down to it, I still don’t have a clue about what it takes to make a car and all of its thousands of parts work together and carry me down the road.

From nowhere, a voice in the back of my mind seemed to shout out to me, “Wait! That’s not how it happened at all!  There was no inventor of the first automobile.  That is just a story that historians have made up to explain what their understanding is of how the car was probably invented.”  “That’s got to be the weirdest thought you’ve ever had jump out of the back of your mind.”, I thought to myself.  But that strange voice spoke up again.

“Not only was there no inventor of the automobile, but I’ll tell you how it really came to be, that beautiful red Bronco of yours.  Thousands of years ago, some rubber from a rubber tree, a patch of iron ore from deep in the earth, and a cow all were standing near one another when suddenly the ground around them exploded!  It was through this awesome phenomenon that your Bronco now has tires, a metal body, and nice leather seats!  That’s just the way that it happened– and you’ve got to believe it happened this way, because it makes so much more sense than to think that someone somewhere invented the automobile.  This Bronco Kaboom makes so much more sense than the idea of an inventor does.”

By this time I was wondering if I wasn’t just delirious from being late for supper, or from having been bent over so much in the previous few hours while working on my car.

But the little voice wasn’t through yet.  “Just kidding”, I heard him say.  “Pretty silly wasn’t it, to think that such an amazing contraption as this vehicle JUST HAPPENED?  It really was kind of crazy to think that something so intricate, so purposeful in its design, might be the result of a cosmic burp or galactic gurgle?  Who in their right mind could conceive that your bright red and shiny Bronco was anything but the product of a craftsman, whose mind had a purpose and whose heart had a flair for the beautiful and the unique?”

And the last thing I heard this peculiar voice say to me has rung in my ears ever since.  He said, “And by the way, you’re a pretty good piece of work yourself.  You’re no ‘freak of fate’– you’re a work of art.  My workmanship, my pride and joy, the one that I look forward to seeing every morning.  Don’t ever let any one tell you different. And if they do, then just tell them about the Bronco that wasn’t an accident.”

I pulled into my driveway and turned off the engine.  For the longest time I just sat there, quietly taking in all I had thought and heard.  The curves on the dashboard took on a new meaning; the bend of the gearshift brought with it the reality of the designer who shaped it for a purpose…  And one more time I started the engine, just to hear the musical hum of the myriad of nuts and bolts, belts and hoses, pistons and plugs; to hear them move in perfect rhythm, and perform in concert to the tune the conductor had written for them.  And then, as simply as I had turned this magnificent machine on, I turned the key and it became still.

I walked slowly into the house, and as usual it was full of activity and life.  Ronda was working on supper and reading the daily mail; the kids each ran through the house, playing, laughing, enjoying those few free minutes before dinner; and I watched.  And as I watched, I thought to myself, “What a day… what a day…”

For some people, it takes a major crisis in their health to cause them to rethink their priorities.  For others, a critical break in a close relationship will serve as a stimulant for life evaluation.  But for me, today, I think God just wanted to use a broken alternator and a big red Bronco.