When Only The Best Will Do- There’s ME… 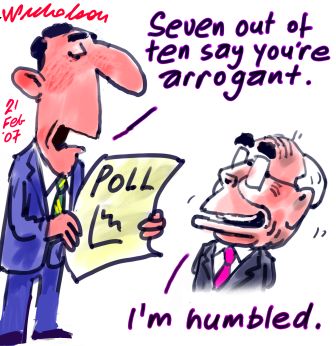 Vanity… if we’re honest, we’ve all been there.

We’ve looked around our neighborhood, our church, our workplace and surveyed the landscape.  At the conclusion of our perusal, we’re convinced of one thing… “I’m glad I’m me, and not them.”  Now, I’m not saying there’s anything wrong with being satisfied in your life, or with yourself.  That’s simply having a healthy and productive self-image/self-esteem in place.  If you do, then good for you!

But what happens when that “feel good feeling” starts to multiply and grow out of control?  It becomes a dangerous, even deadly cancer called Pride, and it can kill your ability to work with others effectively to achieve amazing results, whether that be in your family, social or work life.

I mentioned the  “7 Deadly Sins That Kill Synergy”… They are:

Pride does several things to attack our effectiveness and undermine our success, and all of them have one thing in common… they are all the result of the damage that Pride causes to our ability to SEE CLEARLY… Pride is a Vision Killer…

Pride will hinder and eventually destroy our ability to SEE OUR OWN WEAKNESSES.  If you turn a blind eye to something long enough, eventually that “thing” begins to fade into the background.  If those things you fail to see are your own weak spots, you’re in trouble.  Pride tells you that you are good enough without help or advice from anyone else.  It dims your vision to your own failures, lack of skill and even your lack of objectivity.  Pride pokes a stick in your eye when it comes to putting a critical eye to your own abilities and performance.

Pride can also BLINDS US TO THE SKILLS OF THOSE AROUND US  There are people that we interact with daily that can enrich both our professional and personal lives, but pride clouds our view of the positive impact that their involvement can bring.  What we SHOULD be doing is evaluating them like a coach would the players on his team, determining whose strengths would best be suited for the project, duty or even the moment.  Instead, pride encourages us that we can be the coach, player, team manager, trainer & water boy, and do it all better than anyone else can.  Can you picture a one man team on the field, wearing a self-imposed blindfold, running around the field against a fierce opponent, while there are able, strong and talented players sitting on the sidelines?  It’s ridiculous, but it’s what Pride causes you and me to do!

Finally, Pride will KILL OUR ABILITY TO SEE “WHAT COULD HAVE BEEN”.  One of the primary roles of a leader is to catch and cast a vision for his team.  But is there truly only ONE vision for any given situation or organization?  I say NO!  Thousands of possible visions exist for any particular situation or setting… but a Proud person typically only sees one vision- their own.  And that vision usually involves putting their own skills, talents and performance center stage, with all resources, energies and influence resting in their control.  They are blinded to any vision that involves giving away authority, influence or control to others.  Call it “cataracts of leadership”… the slow build up of a film of pride across their perspective and judgment.  Until they get those “pride-aracts” removed, they’ll never see the wealth of talent and potential that surrounds them… and any synergy that could have been created from bringing those energies together will never be realized.
So how do you help someone whose Pride keeps them from seeing the potential synergy of working with others?
If it’s YOU, and you’ve figured out it’s you, then it’s simple.  STOP IT!!! YOU NEED HELP!!!  Really, it’s that simple!  Realize that you do better, go farther, succeed more often, and accomplish more when you synergize with the talents and efforts of others as a part of the process!  It doesn’t mean that you are not good enough… what it means is that you have greatness within you, and the only way to unlock that leadership is with the key of synergy that others bring with them to the task

Pride... it's a killer of Synergy!

If it’s SOMEONE ELSE that is allowing their Pride to hinder or block their vision to the value of working with others, then the job is slightly more complicated.  Your options are:

1) Just talk to them… lay the problem out simply, but without attacking them.  Share what you see as the value of working with others, and include in that discussion that others are also missing out on successes and growth, because the person in question is not sharing himself/herself with the group.  Remind them that they have much to offer to others.

2) Encourage them to give it a “test run”.  Encourage them to open themselves up to work with others on a short-term project, task or event.  Before this trial run begins, have them break down a list of the potential benefits and pitfalls of working with the group, and then to journal along the way to see if their expectations were correct.  They will most likely be surprised when they see the benefits far outweighing any negatives they might encounter.

3) If you feel qualified, offer to mentor them in this process.  Involve them in a team project that you are leading, and help them see the “play-by-play” issues of delegation, communication, accountability, assessment & reassessment of the task and plan, and so on.  It’s very possible that Pride is simply a mask for the true underlying issue of Insecurity.  It may be that no one has ever modeled synergy for them before, and they are simply afraid of the unknown.

So be encouraged… Pride doesn’t have to be the killer of your organization, of your team, or even of your own career!!! Face it head on, and don’t let it blind you to the unlimited potential that lies ahead!